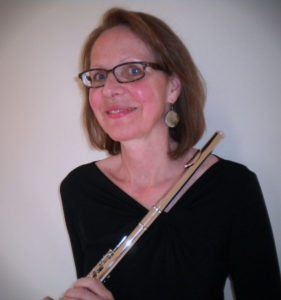 Evelien Woolard has served as principal flute of the Richmond Symphony since 1989 and was hired as personnel manager a few years later. She is also principal of the Blue Ash-Montgomery Symphony and former principal of the Cincinnati Ballet Orchestra (25 years) and piccoloist of the Lexington Philharmonic. In addition to performing as extra with the Cincinnati Symphony and Pops Orchestras, Ms. Woolard is a strong advocate for chamber music and a member of Yellow Wren Music (guitar, flute, double bass), Bicycle Built for Three (voice, flute, guitar), and the Adagio Trio (harp, flute, cello). She previously taught at the University of Cincinnati Preparatory Department and the famed Cincinnati School for Creative and Performing Arts and now maintains a studio in her home in Cincinnati. Ms. Woolard’s husband, Wesley, is RSO principal trumpet. She is pleased to have an integral role in the success of the RSO and thankful to take part in such a quality organization with such a supportive community.