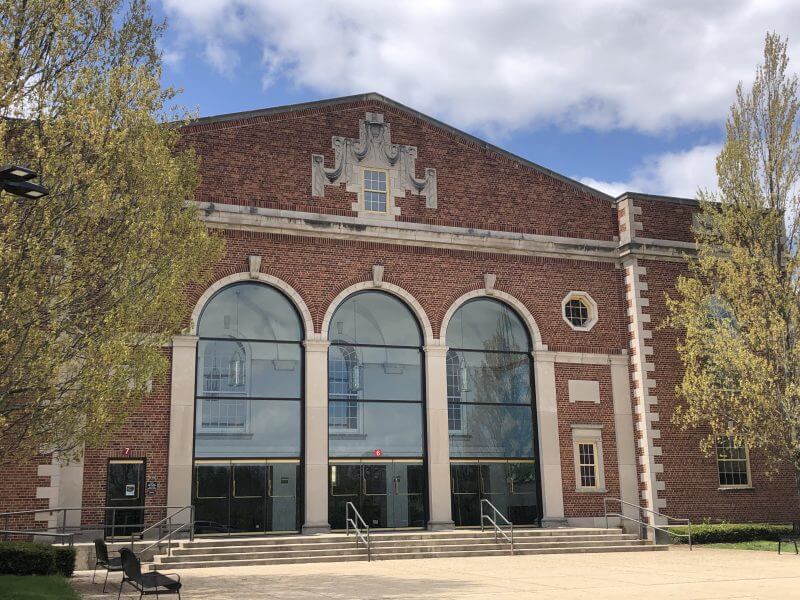 In its youth, the sounds you could hear coming from Civic Hall performances would not have been the sounds of the symphony you hear today. Civic Hall, once a basketball gym and dance hall, underwent a ‘facelift’ to become known as the home of the Richmond Symphony Orchestra. In a Palladium-Item article from 1993, reporter Cheryl Gibbs outlines the years of discussion that led to the renovation of the venue.

According to the article, Civic Hall had officially outlived its usefulness ten years previously (in 1983) due to a newer gymnasium being built. Without a use, the residents of Richmond worked to identify a way that Civic Hall could serve another purpose. Their idea was that Civic Hall could become a performance facility. Gibbs states, “The push to renovate Civic Hall grew out of discussions in the 1970s among people interested in having a performing arts center in Richmond.” After disagreements, these discussions fell apart until 1984 when Richmond Kiwanis Club brought in touring performance group Up with People!, an event that started the fundraising. This performance allowed the Richmond School Board to afford an architect to come in to evaluate if it would be possible to turn Civic Hall into a performance facility.

The original bid for the renovations came in at $4.2 million. With the bid, Sandy Lingle, the executive director of the Richmond Symphony Orchestra at the time, presented to the school board to determine how much money could be raised to allow for the project. In the summer of 1986, the first donation was made.

With the Symphony deciding to hold their ’86-’87 season in Civic Hall, people began to identify Civic Hall’s use as a performing arts center. “That was very critical…That really got people thinking in terms of using that facility as a performing arts facility. It really got people’s creative imagination flowing,” Civic Hall building committee chair Tom Milligan said (qtd. In Gibbs). With the Symphony using Civic Hall, someone had to “clean” it up. Sandy Lingle and Joyce Ringenber, then president of the Richmond Symphony Board, took this task upon themselves. It was noted that the building was in reasonable condition but very neglected and outdated. “It was structurally sound, but it was dirty. The heating, electrical, and plumbing systems were all 1930s vintage and were badly in need of repair. It had just sort of been neglected…It was a mess,” Milligan said” (Gibbs).

In 1987, the greatest impact to the fundraising came in a will from Lucille I. Gamp. Gamp left a bequest valued at more than $1 million for a performing arts center in Richmond. With a judge’s ruling, the Civic Hall renovations project qualified for the use of this money. In 1987, the Richmond School Board used the funds from Gamp’s will for repairs to Civic Hall along with the funds raised privately to build a joint school-community performance center.

In 1989, Civic Hall Associates was created to raise the funding needed to renovate Civic Hall, the design, and event scheduling. In 1991, community fundraising began and construction started in 1992. In August of 1993, Civic Hall was opened to the public. In the beginning of Gibbs’ article she brings it full circle by stating:

Today, their dream has become a reality. When Civic Hall opens this weekend, it will look nothing like the dingy cavern it once was.

But they won’t see the nine years of fundraising and more fundraising, drawing and redrawing plans, and, finally, the year and eight months of construction and renovation that brought the hall to its new condition.

Civic Hall has become a symbol for the Richmond Symphony Orchestra. There are many articles written about the efforts to renovate the hall and the fund-raising efforts it took to complete the project. But today when you step into Civic Hall you most likely don’t think of those past struggles. You think of the wonderful music that you will hear being performed in this small community performing arts center.