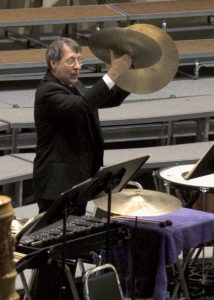 Bill Albin began performing with the RSO in 1975 under the direction of Manfred Blum, the same year he began his teaching career at Miami University as director of percussion studies and percussion ensembles, and also founded the M.U. world percussion program. He retired from M.U. last December but continues to collaborate as Professor Emeritus.

Bill is most proud of having the opportunity to perform in the RSO alongside numerous former M.U. students.

In Bill’s own words “What success I might have had as a performer is all the result of a supportive wife and family that consists of three lovely daughters and four beautiful grandchildren, expanding to five this coming fall.”