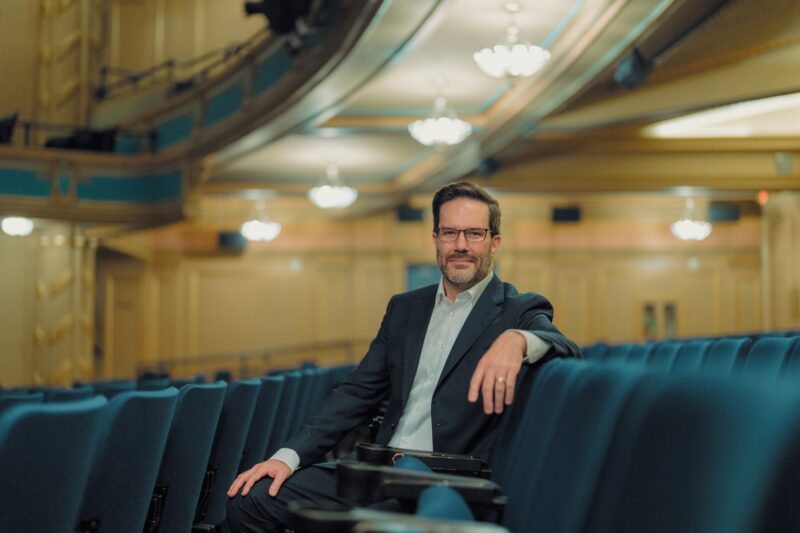 In January 2022, Matthew Kraemer was selected as one of the five finalists for the Music Director position that opened due to the retirement of the previous conductor Guy Bordo.

A Richmond native, Kraemer has a long history with RSO dating back to his elementary school years. “My relationship with the RSO began in elementary school when I first heard the orchestra in Civic Hall (prior to its renovation)”, says Kraemer.  “Later, I would compete in the Young Artists’ Competition, perform in a side-by-side, and eventually serve as principal 2nd violin.  I returned to guest conduct the RSO early in my career nearly twenty years ago, and now I share the stage with the musicians again!”

On January 17, Kraemer accepted the position as Music Director of the Louisiana Philharmonic Orchestra. Kraemer also extended his contract with the Indianapolis Chamber Orchestra through 2023.

When Kraemer informed search chair Jeff Jackson that he was no longer considering the position with RSO and would be happy to step aside and let another candidate conduct in January, Jackson said he wouldn’t hear of it expressing excitement in welcoming Kraemer back to the stage to lead the RSO.

Jackson also shared his thoughts on having one less finalist. “This two-year process is lengthy. Most of our candidates are looking at other positions. We are not at all surprised to conclude the search with fewer candidates than we started with.” About Kraemer specifically, Jackson says, “The search team was impressed with Matthew’s maturity and interest in growing our outreach to children. Having roots in Richmond made him even more attractive as a finalist. However, Richmond patrons should recognize that having Kraemer in the pool that was selected for such a nationally recognized orchestra says a great deal about the talent RSO was able to attract in its finalists.”

When asked about his selections for the evening, Kraemer shared, “Tonight’s program features some of my favorite works.  I’ve always enjoyed the marvelous imagery and colors Respighi creates in his music.  I also adore the film scores from the Golden Age of Hollywood.  Korngold, as much as anyone, helped to create that sound, which is so discernible in his Violin Concerto. I’ve conducted Dvorak’s 8th and 9th symphonies perhaps more than any other works in the repertoire.  I think this program will really allow the RSO musicians to shine.”

Sharing his excitement about his return to the Richmond stage, Kraemer shares, “I can honestly say it means a great deal to me.  When I sat on this stage as a high school senior, playing in the RHS orchestra under Ralph Burkhardt, I would never have imagined where my career would take me.  I’m looking most forward to making music with talented colleagues, many of whom I have the pleasure of working with in other places, and to spend the evening with so many people who have supported my journey along the way.”

The board and staff of RSO congratulate Maestro Kraemer on his newest appointment as Music Director of the Louisiana Philharmonic Orchestra beginning in July. “It’s an amazing testament to the history and potential of the RSO, that the organization could inspire a young musician and provide so many learning and engagement opportunities,” boasts Monica Koechlein, RSO’s Executive Director. “We look forward to this celebratory moment for Matthew, the musicians and the audience. I hope Richmond will join us in Civic Hall and provide a warm welcome home and feel pride in the amazing opportunities this community provides.”

Kraemer looks forward to the new challenge as well.

“The Louisiana Philharmonic is a distinctly unique orchestra in one of the most fascinating, historical, and multicultural cities in the country,” shares Kraemer. “I look forward to the creative opportunities and inherent challenges leading a 36-week season, musician-governed orchestra.”

RSO invites you to conclude the search on February 25 under the baton of its final candidate Andrés Lopera. Regarding the final steps in the search, Jackson asks for patience. “Once surveys from the board, patrons and musicians have been collected, the real work of the search team begins. It’s not going to be easy, but the team is listening to collected feedback and discerning the future of the RSO and which candidate can best take us there. Look for an announcement soon after our final concert on March 11 when RSO will welcome another Richmond native, Maestro Jack Everly in a Tribute to Hollywood.”

To join RSO in providing a warm welcome to Maestro Kraemer, tickets can be purchased here. Individual concert tickets are available for $25 for adults and seniors, $10 for college students, and are free for children in grades K-12. Individual box seat tickets, if available, will sell for $35. Patrons may also call the Richmond Symphony office, 765-966-5181, or on the night of the performance at the Civic Hall Ticket Office.