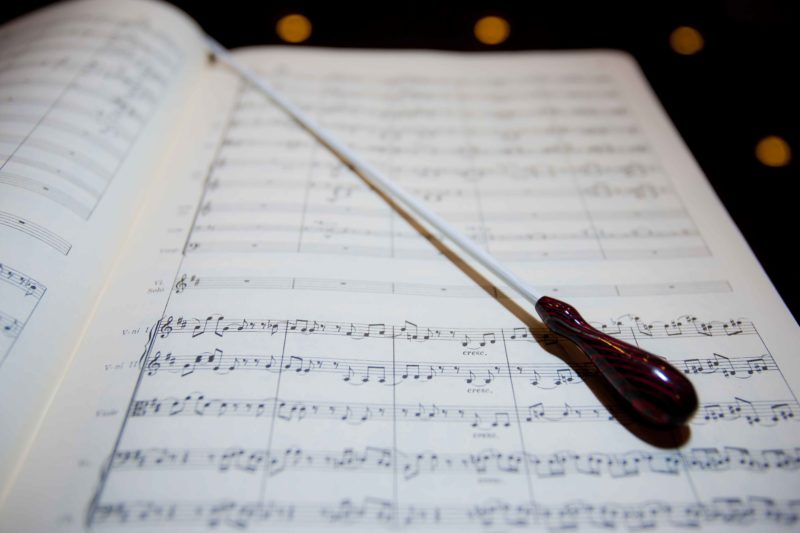 As announced at the beginning of our season, Maestro Guy Victor Bordo has communicated his intention to retire from the Richmond Symphony Orchestra (RSO).  “I want to thank the community for your great support and enthusiastic attendance at concerts. I greatly appreciate the musicians, donors, staff and Board of Directors,” says Bordo. The RSO thanks Maestro Bordo for his 25 years of service and his many contributions to the quality and growth of the RSO during that time and wishes Maestro Bordo and his wife Deb all the best in the future. Bordo continues, “My wife Deb and I will miss the many wonderful friends we have in Richmond. It has been a pleasure to be associated with the RSO.”

Closing out the RSO’s 65th season, the orchestra will be led by Guest Conductor Maestro Wilbur Lin on March 5 and April 9, as well as our Signature Event “Show Me The ‘90s” on April 30.

Turning its attention to an exciting year of transition, the RSO Board of Directors and Search Committee is pleased to announce its five candidates for their next Music Director & Conductor.

In its 65th season, the Richmond Symphony Orchestra has had only three music directors, but the 2022-2023 season will see five candidates audition to serve as its next leader.

After a six month process, an 11-member Search Team led by Board member Jeff Jackson has identified five candidates they believe can successfully step into the role as the RSO’s fourth Music Director & Conductor.

Each of the finalists will conduct one of the RSO’s Masterworks concerts during the 2022-2023 season, titled A New Perspective. After each concert, the audience will be invited to submit comments through online or written surveys. These comments, along with feedback from musicians and RSO leadership, will help determine the future leader of the orchestra.

“For our audience, this is a unique opportunity to participate in the selection of the RSO’s next conductor as we continue to build Richmond’s important musical heritage,” said Jeff Jackson, RSO board member and leader of the search committee. “We feel that each of our five finalists demonstrates the highest level of artistry, vision, versatility and innovation. Equally important, each has experience in growing audiences and educational outreach. We are very excited to share their talents with the community and have our audiences join us in the selection process.”

The RSO Board of Directors is pleased to announce the following five finalists for the Richmond Symphony Orchestra’s Music Director & Conductor position:

LUKE FRAZIER will join the RSO in its opening concert of the upcoming season on September 17, 2022.

Luke Frazier believes the future of orchestral music is breaking down barriers between orchestras and audiences. He believes the role of a conductor is not only musical excellence, but also creating diverse and engaging programming that brings communities together through the joy of music.

Frazier is conductor of the American Pops Orchestra (APO) which he founded in 2015 with the purpose of presenting a broad array of popular and classical music in innovative ways to bring new audiences into the orchestral world. Most recently APO was featured in more than twelve national broadcasts on PBS. Luke maintains a busy schedule as a guest conductor and pianist. He serves as inaugural Principal Pops Conductor for The National Philharmonic featuring performances in venues from Lincoln Center to the Smithsonian, Feinstein’s/54 Below to The Kravis Center and many more.

JACOB JOYCE will lead the RSO in its second Masterworks concert on October 15, 2022.

Jacob Joyce brings tireless passion for music-making and a love for outreach to his work. Joyce strives to maintain and develop the orchestra’s vital musical and social presence both on the stage and in the community.

Joyce serves as Resident Conductor of the Indianapolis Symphony Orchestra which he led in a variety of concerts in the past three seasons. Quickly gaining recognition as a dynamic and innovative presence on the podium, Joyce has made several guest appearances nationally and internationally and was recently named Associate Conductor of the Pittsburgh Symphony. Joyce is also an accomplished violinist.

An advocate for bringing classical music to new audiences, Jacob is the host and creator of the podcast Attention to Detail: The Classical Music Listening Guide, which provides people of all backgrounds with basic techniques for listening to classical music.

WESLEY SCHULZ will make his debut on the Civic Hall stage on November 19, 2022.

Wesley Schulz is widely recognized for his superb programming and spirited yet heartfelt music making with orchestras. At the core of his artistry is the desire to unite people through thought-provoking performances.

Schulz is Music Director and Conductor of the Auburn Symphony Orchestra (WA) and recently completed four successful seasons as Associate Conductor of the North Carolina Symphony where he conducted over 200 performances in a wide variety of genres, including his passion – educational programming. He is committed to deepening the relationship between the symphony and the community. Recent endeavors include collaborations in the arts community, multiple commissioning projects, and diverse concert presentations at local parks, breweries and community spaces.

As a community builder, Wesley frequently brings together artists, philanthropists, business entities, and political leaders in support of the Arts.

Matthew Kraemer is recognized for his musical sensitivity and energized sense of interpretation. He is committed to audience development and building community support for the symphonies he leads.

A Richmond native, Kraemer was appointed Music Director and Conductor of the Indianapolis Chamber Orchestra in 2015. Additionally, he serves as Music Director of the Butler County Symphony (PA), the Marion Philharmonic, and is the Artistic Advisor of the Muncie Symphony Orchestra. He also maintains an active guest conducting schedule. Kraemer is increasingly recognized for his committed advocacy of music education and his devotion to young audiences.

Matthew believes an orchestra’s true strength is determined by its relevance within the community. This belief assists him in creating programming that offers something for everyone, from a first-time concert goer or a longtime season ticket holder.

ANDRÉS LOPERA will join the orchestra as our fifth and final candidate on February 25, 2023.

Exciting, creative, engaging and motivating are some of the words that have been used to describe Andrés Lopera. One of the leading Latin-American conductors in the US today, the 34-year old Colombian native brings more than 10 years of leadership experience with both professional orchestras and youth orchestras to his role.

Lopera is in his 3rd season as Associate Conductor of the Columbus Symphony (OH) and Music Director of the Columbus Youth Symphony Orchestra. During his time in Columbus, he has transformed educational programming and the community presence of the orchestra. This presence included a new community concert series with performances in parks around the city.

Andrés is a passionate conductor who believes in the transformational power of music with a goal of making meaningful connections for both musicians and the community with the orchestra.

Two additional concerts are being planned in the transitional season. The RSO Brass will take center stage on December 11, 2022 with a holiday concert made possible by a very generous gift from the West End Bank Charitable Foundation. This gift, given to eight Wayne County organizations in April of 2021, ensures a brass concert becomes a permanent fixture in the RSO’s annual programming.

The 2022-2023 season will conclude during the March 25-26, 2023 weekend with a return to the stage of Richmond native and guest conductor Jack Everly. Everly is the Principal Pops Conductor of the Indianapolis and Baltimore Symphony Orchestras, Naples Philharmonic Orchestra and National Arts Centre Orchestra (Ottawa).

Celebrating his 11th anniversary as Music Director of the National Memorial Day Concert and A Capitol Fourth on PBS, Maestro Everly proudly leads the National Symphony Orchestra in these patriotic celebrations on the West Lawn of the US Capitol. These concerts attract hundreds of thousands of attendees to the lawn and the broadcasts reach millions of viewers and are some of the highest rated programming on PBS.

Plans for Everly’s visit and performance are yet to be determined.

Tickets for the upcoming season will be on sale beginning May 1, 2022. “We’d love to have full audiences next season to provide a warm welcome to our finalists,” says Jackson. “Please plan to join us to share your input and be a part of shaping the RSO’s future.”