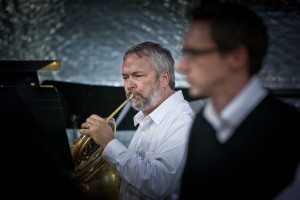 Darin Sorley has been principal horn of the Richmond Symphony Orchestra since 2004 and previously served as principal with the Evansville Philharmonic.  As a professional freelance horn player, Darin is the “first call” substitute with the Indianapolis Symphony Orchestra.  He has also performed as substitute principal horn with the Indianapolis Chamber Orchestra, Fort Wayne Philharmonic and the Lafayette and Anderson Symphonies.  Darin has performed with Ray Charles, Josh Groban, Luciano Pavarotti, Michael Feinstein, Amy Grant, Toni Tennille, Doc Severinsen, Mannheim Steamroller and the Moody Blues to name a few.  He has had the pleasure to perform under the batons of Krzysztof Urbanski, Raymond Leppard, Mario Venzago, Kurt Masur, Christoph von Dohnanyi, Matthew Kraemer, Jack Everly and of course Guy Bordo. 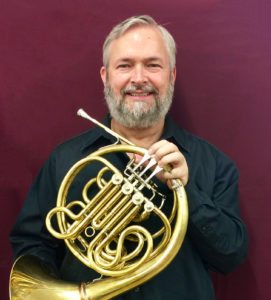 Darin received his BME from Butler University and an MM in Horn Performance from the Cleveland Institute of Music with additional studies at Indiana University.  His teachers include Philip Farkas, Michael Hatfield, Richard Solis and Jerry Montgomery.  Darin is Instructor of Horn at the University of Indianapolis since 2001 and previously taught at the Universities of Evansville and Southwest Missouri State (now Missouri State University).  In his early career as a band director, Darin taught in the Delphi, Rushville and Center Grove School Corporations.

Darin has served as the Music Director of the Indianapolis Brass Choir since 2014 and previously served in the same role with the Indianapolis Chamber Winds.  As a custom horn builder and owner of Sorley Horns, LLC, Darin has made instruments that are being played in Australia, Poland, Germany and the USA.  Darin plays a Sorley Model GS1 in brass which he built the Summer of 2015.

The best part of Darin’s bio is that he has been married for 30 years to Dr. Rebecca Sorley, Professor of Piano at the University of Indianapolis.  They have three children: Allegra, a pianist/music therapist; Alex, a Political Science/pre-law major at Stetson University and Adam, an 8th grade singer and horn player.