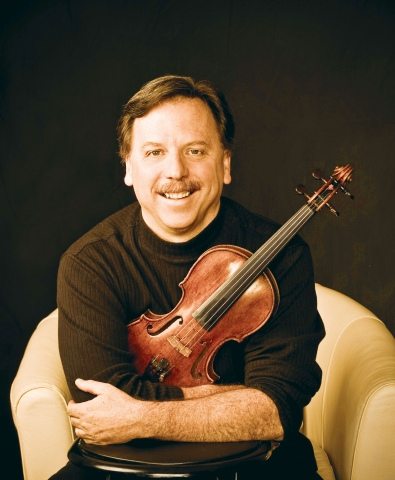 Violinist Harvey Thurmer enjoys a varied career as a soloist, concertmaster, chamber musician and pedagogue. A native of Tennessee, his studies included work with mentors Dorothy DeLay and Louis Krasner at the New England Conservatory, and Sandor Vegh at the Mozarteum in Salzburg, Austria.

After finishing his studies in Austria, he performed extensively as a chamber musician in Europe, with appearances at the Salzburg Festival, the Cheltenham Festival in England, London’s Wigmore Hall, Zurich TonHalle, Leipzig Gewandhaus, Paris Salle Gavaeu, and Amsterdam’s Concertgebouw. As a member of the Franz Schubert Quartet of Vienna, he held teaching positions at the Graz Musickhochschule and the Royal College of Music in Manchester England. He has taught at the Lappland Festival in Sweden, the Lake District Summer Music Festival in England, and the Summer Acadamy in Graz, Austria. He has collaborated with artists such as cellist David Soyer of the Guarneri quartet, pianists Anton Nel, Sandra Rivers, Jorg Demus and Cyprien Katsaris, and clarinetists Peter Schmiedl and Alois Brandhoffer of the Vienna Philharmonic. Mr. Thurmer perfomed annually from 1997 -2006 as concertmaster of the Echternach Festival Chamber Orchestra in Luxemburg. As a member of the Oxford String Quartet he has performed in Venezuela, Austria, Seoul, South Korea and Nagasaki, Japan and in the US in NewYork, Ohio, Indiana, Maryland, West Virginia, and Virginia.

Mr. Thurmer is actively involved in the promotion and recording of new music. He has worked with composers Gyorgy Kurtag, Bright Sheng, Chen Yi and Michael Colgrass. His recording of Kurtag’s “Kafka Fragmente” with soprano Audrey Luna, available on the Ars Moderno label, represents the first recording of this monumental work by American artists. A recording project for the Naxos label of chamber music of James Lentini is planned for 2009. He is a regular faculty member of the Sewanee Summer Music Festival in Sewanee, Tenessee, where he teaches and performs for five weeks every summer. Additionally he performs nationally with fellow Sewanee faculty members Natasha Farny, cellist and Gary Hammond, piano who teach in New York. He is also a member of Miami 3, a newly formed faculty ensemble, with Michele Gingras, clarinet and Heather MacPhail, piano. He currently is an Associate Professor of Violin at Miami University in Oxford, Ohio and is in his 9th season as the concertmaster of the Richmond Symphony Orchestra in Richmond, Indiana.

He is married to Jane Knowling Thurmer and they have two wonderful children, Will and Marin.