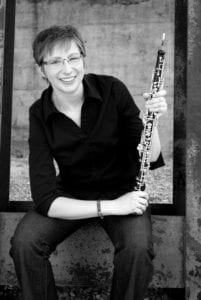 Each month, the RSO introduces you to a member of our orchestra. This month, get to know Sara Renner!

An accomplished oboist with an international performing career, Sara Renner holds a Bachelor’s of Music in Oboe Performance from the University of Nebraska at Omaha, as well as a Master’s of Music from the Schwob School of Music at Columbus State University. She is currently pursuing a Doctorate of Musical Arts degree at the University of Cincinnati-College Conservatory of Music, where she is a student of Dr. Mark Ostoich and Dwight Parry. As the former principal oboist of the Shen Yun Performing Arts New York Touring Company and Shen Yun Symphony Orchestra, Sara has performed in almost every major opera house and concert hall in the United States and abroad, including Carnegie Hall, Boston Symphony Hall, Davies Symphony Hall, Chicago Symphony Center, the Kennedy Center, the David Koch Theatre at Lincoln Center, the Barbican Centre (London), The Arts Centre (Melbourne), The Capitol Theatre (Sydney), Bunka Kaikan Theatre (Tokyo), and others. Sara completed three international tours with Shen Yun, performing across Canada, Europe, Argentina, Australia, Taiwan, Japan, and Korea. Upon her completion of touring, Sara served as the first call substitute for the South Dakota Symphony Orchestra.

In the summer 2017, Sara joined the festival orchestra of ÓperaMaya as Principal Oboe, where she performed across the Yucatán Peninsula. During this time, Sara was also invited to serve as the Guest Principal Oboe for the Camerata de Cancún. Sara returned to Mexico this summer, where ÓperaMaya made history as the first Western classical music performance in the city of Mahahual.

When not making oboe reeds or practicing, Sara enjoys yoga, running, ultimate frisbee, and volunteering for the woodwind program at the MYCincinnati music school.